China Archives - Amazing FBA - How to sell on Amazon UK 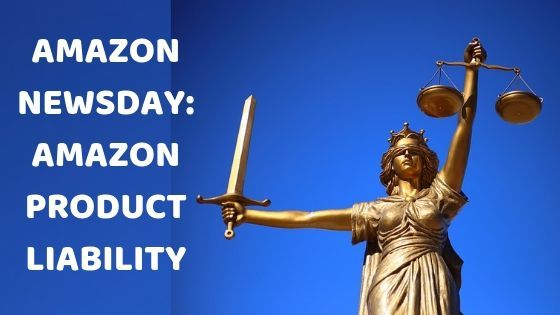 Consumer Discretionary Stocks, traded in the exchange traded funds (ETF) world, could get another big boost next week after hitting a new 52-week high.

CRFF research director, Todd Rosales, head of the ETF , said they were expecting prime day to be a record-breaking event for Amazon this year

Amazon is still the chief innovator

Jay Jacobs,  head of research at global X funds, said: “you have to ask what are the small companies doing differently to separate themselves on the markets? When you look at the Amazons of the world, they’re the innovative ones, not the small companies right now.”

Amazon product liability: A federal court ruling that Amazon.com Inc. can be held liable for a dog collar sold on its website that partly blinded a woman could complicate the online merchant’s business if it is applied broadly.

The lawsuit was brought by a woman, Heather Oberdorf, who had bought a dog collar with a retractable leash sold by the Furry Gang through Amazon. When she took her dog for a walk, the pet lunged, breaking a ring on the collar, she claimed. That caused the leash to recoil and hit her face and eyeglasses, permanently blinding her in the left eye, she alleged.

The 3rd party seller – “The Furry Gang” – could not be contacted or otherwise found by Amazon or the consumer. Amazon product liability thus fell to Amazon itself.

The Third Circuit Court of Appeals, in Philadelphia, on July 3 overturned a judge’s decision that Amazon was shielded under the Communications Decency Act, which protects online businesses from lawsuits over the postings of their users.

Specifically, The Communications Decency Act protects Amazon from Oberdorf’s failure-to-warn claims, the appeals court said in an opinion by Judge Jane R. Roth. But the Act’s immunity provision for online-platform providers doesn’t protect the company from her claims that Amazon is liable for “selling, inspecting, marketing, distributing, failing to test, or designing” the collar, the court said.

This meant that the Amazon product liability ultimately fell on Amazon itself. It’s the first federal appeals court to hold that Amazon is a product “seller” that can be held liable under state law for sales on its marketplace.

That is so, the court said in a divided ruling on Wednesday, “even though the products are sourced and shipped by third-party vendors.” It found that “Amazon’s involvement in transactions extends beyond a mere editorial function; it plays a large role in the actual sales process.”

If the ruling is applied more broadly, it could significantly affect Amazon’s product liability, which in turn could affect its entire business model.

More than half the items sold on the popular site come from independent merchants. Amazon takes a commission on sales and charges additional fees for storing products in its warehouses, packaging them and delivering them. But it technically doesn’t own the inventory, a fact it has used to protect itself from product liability cases.

Pennsylvania uses guidelines employed by other states, so the Third Circuit’s reasoning could be applied more widely. That could impose on Amazon greater responsibility over the goods posted on its site, possibly adding new costs and complexities to a business model designed around efficiency.

Amazon and the USA Governments

However, the precedent is not yet clear-cut. Also, although Amazon has not yet commented on the ruling, it seems likely the company will ultimately appeal the ruling. A lower court will rule on whether the leash that caused Oberdorf’s injury was, indeed, defective.

Three other federal appeals courts have ruled recently in product cases brought against Amazon. Two ruled in the company’s favour on the “seller” issue. The third didn’t address the issue directly.

Like many areas involving the relationships between Amazon and State and Federal governments, the future is not yet entirely clear. But it is another of the many rulings of the last couple of years that point to the tide of Amazon’s relentless success in holding off liability and responsibility for 3rd party sellers’ activities (including the infamous ongoing sales tax battles with state governments) beginning to turn against the Seattle-based giant.

On July 1, a public holiday known as establishment day in honour of the handover of the Hong Kong territory in 1997 from Britain to China, anti-government protesters stormed into the city’s council chamber, displaying a British colonial flag for cameras and life social media feeds.

Carrie Lam, the territory’s chief executive, held a press conference at police headquarters at 4 AM local time on July the second, condemning the break-in and vowing that the perpetrators would be caught and punished.

The Chinese central government liaison office in Hong Kong declared that the acts were an outright breach of the rule of law.

The Chinese ambassador to Britain, Mr. Liu, said the radicals had challenged the bottom line of “one country, two systems”, the framework, negotiated in a treaty with Britain, under which Hong Kong’s freedoms are meant to be protected until 2047.

Mr Liu warned the British to stay out of the fight, following the UK government warning to China to abide by its commitments under the bilateral treaty. Mr Liu said the UK government chose to stand on the wrong side. He warned of consequences to the relationship with China if Britain continued to interfere.

Process for Writing a Listing with Emma Schermer Tamir

Welcome to the Amazing FBA Blog!